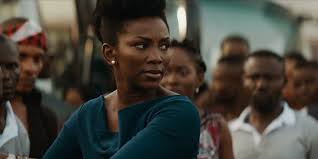 I started this blog four years ago because I dreamt of a time where Nigerian entertainment, be it music or movies would be recognised on par with entertainment from the west. There has been tremendous progress over the years but finally we have our first Nigerian movie acquired by Netflix. The streaming giant purchased the worldwide rights, making Lionheart its first originals film from Nigeria.

Netflix has slowly been acquiring licences to Nigerian movies over the years and have streamed movies such as The Wedding Party, The Arbitration, Fifty and October 1st.

The movie starring and directed by Nnaji premiered at the Toronto Film Festival and was nominated for The Toronto International Film Festival Grolsch People’s Choice Award.

Lionheart is a comedy about Adaeze (played by Nnaji) trying to save her dad’s failing business. Lionheart highlights the sexism that is still rife in Nigeria and puts a spin on the old saying ‘family and business do not mix’. The movie features an array of new and old Nollywood stars.

Genevieve is a household name and has starred in over 80 movies. I am truly inspired by not only her directing debut but also her contract with Netflix and making international developments in Nollywood. Just makes you wonder what you can achieve when you set you heart on something and a little dedication.

Catch the trailer for Lionheart below..

Make sure you support Nigerian talent and stream the mobie on Netflix when it becomes available.